FEniCSx is a popular open-source computing platform for solving partial differential equations (PDEs). FEniCSx enables users to quickly translate scientific models into efficient finite element code. With the high-level Python and C++ interfaces to FEniCSx, it is easy to get started, but FEniCSx offers also powerful capabilities for more experienced programmers. FEniCSx runs on a multitude of platforms ranging from laptops to high-performance clusters.

Solving a PDE in FEniCSx

As an illustration of how to program a simple PDE model with FEniCSx, consider the Stokes equations in variational form:

The variational problem is easily transcribed into Python using mathematical operators in FEniCSx: 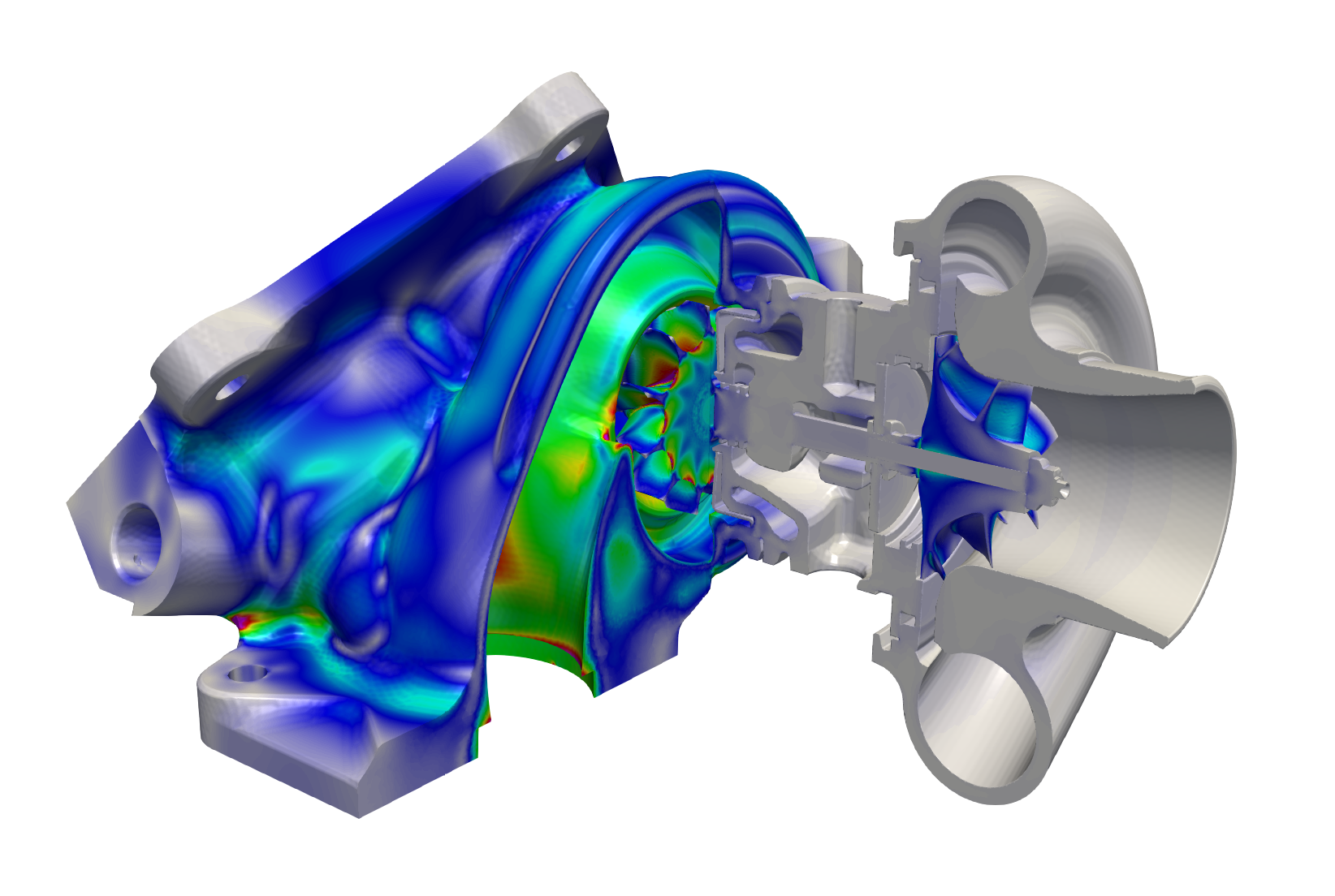 Each component of the FEniCSx platform has been fundamentally designed for parallel processing. Executing a FEniCSx script in parallel is as simple as calling mpirun -np 64 python script.py. This framework allows for rapid prototyping of finite element formulations and solvers on laptops and workstations, and the same code may then be deployed on large high-performance computers.

The figure shows the von Mises stresses computed from a nonlinear thermomechanical FEniCSx simulation of a turbocharger. The finite element system of linear equations comprises more than \(3.3 \times 10^9\) degrees of freedom. The solver was initially developed on a desktop computer for a small scale problem, and the same code was then deployed on a supercomputer using over 24,000 parallel processes.

FEniCSx is available for a range of platforms (Linux, Mac, Windows). Choose between Docker containers, binary packages, Spack packages and source code. Visit our installation page to get the latest version of FEniCSx. FEniCSx comes with extensive documentation and numerous examples.

In 2018, work started on FEniCSx: the new version of the FEniCS library. FEniCSx has a number of major improvements over the legacy library, including support for a wide range of cell types and elements, memory parallelisation, and complex number support, as well as a large number of improvements to the overall library design. FEniCSx is comprised of the libraries UFL, Basix, FFCx and DOLFINx. The latest version of FEniCSx (0.5) was released in August 2022.

Now that development is focussed on FEniCSx, updates are made very rarely to the legacy FEniCS library. We recommend that users consider using FEniCSx instead of the legacy library. Lecacy FEniCS is comprised of the libraries UFL, FIAT, FFC and DOLFIN. The latest version of legacy FEniCS (2019.1.0) was released in April 2019.

FEniCS is a NumFOCUS fiscally supported project. If you like FEniCS and want to support our mission to produce the best possible platform for open-source computing, consider making a donation to our project.